All the Ice run-time and user exceptions are arranged in an inheritance hierarchy, as shown below:

This figures shows the complete hierarchy of the Ice run-time exceptions: 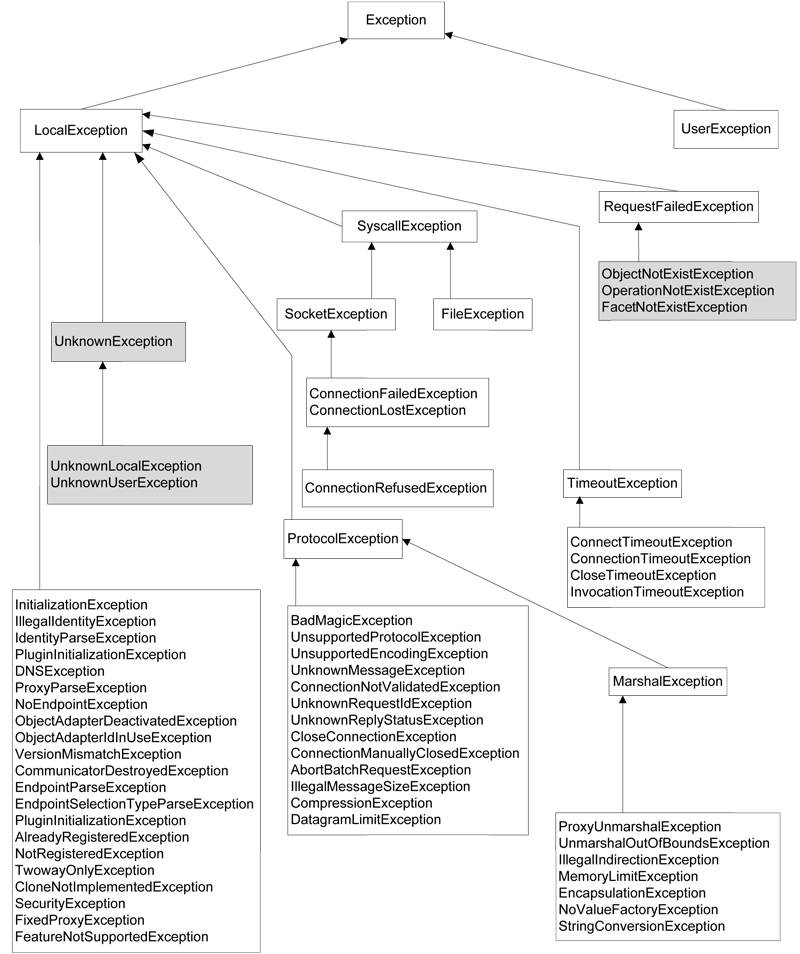 Ice run-time exception hierarchy. (Shaded exceptions can be sent by the server.)

Many of the run-time exceptions have self-explanatory names, such as MemoryLimitException. Others indicate problems in the Ice run time, such as EncapsulationException. Still others can arise only through application programming errors, such as TwowayOnlyException. In practice, you will likely never see most of these exceptions. However, there are a few run-time exceptions you will encounter and whose meaning you should know.

Most error conditions are detected on the client side and raised locally in the client. For example, if an attempt to contact a server fails, the client-side run time raises a ConnectTimeoutException.

Most likely, this is the case because the object existed some time in the past and has since been destroyed, but the same exception is also raised if a client uses a proxy with the identity of an object that has never been created.

The client attempted to contact a non-existent facet of an object, that is, the server has at least one servant with the given identity, but no servant with a matching facet name.

This exception is raised if the server could locate an object with the correct identity but, on attempting to dispatch the client's operation invocation, the server found that the target object does not have such an operation. You will see this exception in only two cases:

RequestFailedException itself is not transmissible as a response from a server to client—only the three derived exceptions are.

If you throw one of these three exceptions from the implementation of an operation, and you leave id, facet or operation empty, Ice will automatically fill-in the missing data members using values from Current.

A common cause for a client receiving an UnknownLocalException is failure to catch and handle all exceptions in the server. For example, if the implementation of an operation encounters an exception it does not handle, the exception propagates all the way up the call stack until the stack is unwound to the point where the Ice run time invoked the operation. The Ice run time catches all Ice exceptions that "escape" from an operation invocation and returns them to the client as an UnknownLocalException.